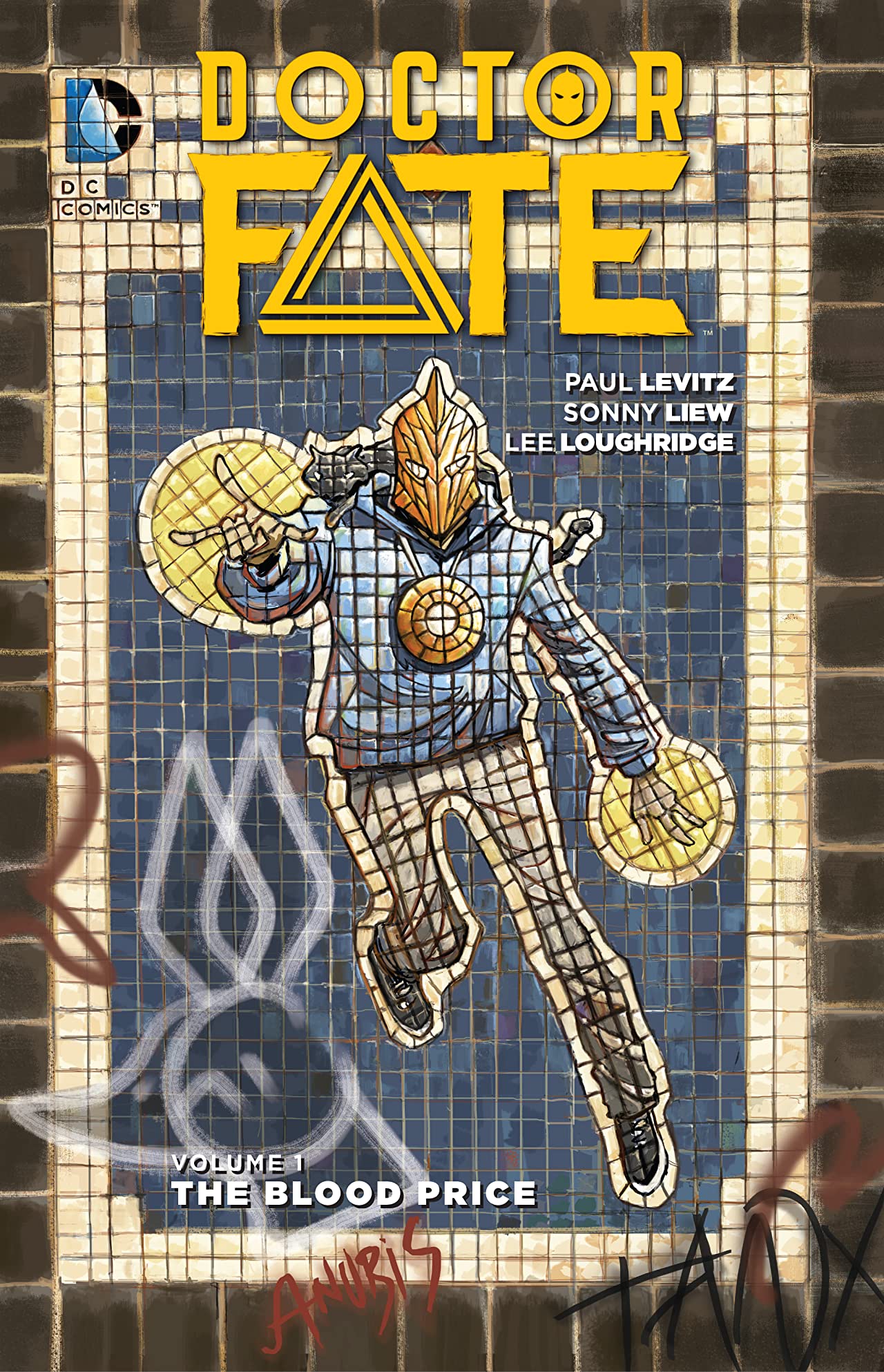 Paul Levitz is a writer and comics legend whose winding, long-winded Legion of Super-Heroes (past and more present) I’ve often enjoyed. Those same attributes, however, haven’t benefitted titles like the Huntress/Power Girl team-up Worlds' Finest, which often seemed to struggle for plot between its fight scenes. And his guest stint on Geoff Johns' JSA read as “stodgy,” with an older-generation DC writer writing DC’s older generation characters not, unfortunately, yielding something new.

With those expectations going in, I was pleased to find that Levitz' DC You-era Doctor Fate Vol. 1: The Blood Price has a sprightly coolness to it. Not to take away from Levitz, but surely a large part of that must be credited to artist Sonny Liew, whose cartoony, often psychadelic style sees new young Fate Khalid Nassour in no more costume than a helmet and a hoodie and makes it work. As was the case with most of DC You, Doctor Fate doesn’t look like traditional superheroics, and that goes great lengths to help it feel like more than traditional superheroics as well, plus Levitz’s plot steeped in ancient gods and Egyptian mythology.

Doctor Fate was a title I skipped before, and honestly I’m mainly here because some iteration of the character continues into the Rebirth Blue Beetle series. That series included both Jaime Reyes and post-Crisis Blue Beetle Ted Kord, quietly resurrected as of Rebirth and mostly behind-the-scenes aside from Blue Beetle, at least until he’s now appearing in … another book, where strangely he seems cast as a villain? So the intention is to bring myself up to date on Ted Kord, and it turns out that starts with Doctor Fate.

Blood Price collects issues #1–7 of Levitz’s Doctor Fate, plus the preview story from that time. Seven issues is of course one more than your average arc these days, for better or worse, and it is in this case “worse.” Levitz gets off to a good start, but by about the fifth chapter the interstitial material starts to get repetitive, suggesting the story might have benefitted from about one issue less.

Surely the best part of Blood Price is the creative team’s conception of Khalid (whom we’re told briefly, with a wink and a nod, sometimes goes by “Kent”). He’s just starting as a medical student, so cleverly we have a Fate who’s actually (becoming) a doctor, and some of the better superhero scenes are when Khalid’s medical knowledge comes to the forefront. It wouldn’t seem the series lasted long enough for Khalid to get into a residency, but the premise has a lot of potential in how Khalid’s duties in a hospital and his superheroing might coincide.

In broad strokes, Doctor Fate is one of those “young hero learns to handle great responsibility” stories of the kind I’m sure Levitz saw dozens of times during his DC tenure. In this again, Levitz gets Khalid spot on — neither particularly heroic but not antiheroic, nervous about school and seemingly unable to quite get his signals right with his girlfriend Shaya. Khalid’s awkwardness is enhanced by Liew’s gangly, exaggerated figures — artist Alvaro Martinez did fine work early on in James Tynion’s Justice League Dark, but it’s a shame his Khalid looks like a typical kid rather than the angular figure shown here.

Much of the book’s action takes place in Brooklyn, where Levitz grew up, and there’s a nice feel of New York here, between the subways and subway signs and taxis. Inasmuch as I mentioned “superheroics,” Blood Price also distinguishes itself by the threat of a biblical flood and Khalid trying to prevent the god Anubis from wiping humanity out; there’s no costumed opponents here, though I’d be interested to see how Levitz and Liew handle that. Where Blood Price begins to get long is in the middle space between beginning and end; it’s fine when Khalid first receives the helmet and picks up again when he must fight his way back from Anubis' kingdom, but drags in Levitz’s too-long navel gazing about what Khalid should do about the flood and whether he’s ready for the Fate mantle.

Toward the end, as Khalid ponders whether he needs the help of gods to fight gods, Levitz gets into Khalid’s own religious upbringing, raised with essentially no religion by a lapsed Christian mother and Muslim father. Among the more interesting subplots is the brewing love triangle in which Khalid and Shaya don’t seem to connect and meanwhile friend Akila vies for his affections — Shaya, like Khalid, being more westernized and Akila being more traditional. Obviously Levitz has created this dichotomy for a reason, with the story likely to see Khalid move from Shaya to Akila; I will be curious to see how that subsequently coincides with his embracing of the Fate role.

It’s also notable how in Blood Price, the Helmet of Fate is associated with Thoth and the Egyptian gods, not with the Lords of Order and Chaos, giving Fate a more supernatural than sci-fi basis. Equally Nabu is almost a comical figure here, something of a guide for Khalid, rather than the overwhelming and often nefarious presence otherwise found in the helmet. We know that certain of these trappings of Fate will return to their more common depictions by the time the Rebirth Justice League Dark rolls around, so also I’m curious in reading the next two Doctor Fate volumes whether that’s foreshadowed here or if it’s just a blanket change with Rebirth.

With Sonny Liew’s art, Paul Levitz’s Doctor Fate Vol. 1: The Blood Price distinguishes itself even when it might otherwise struggle. I’d be happy to see Liew return to a DC title and for the DC You sensibilities to feel like less the exception and more the rule.

Email ThisBlogThis!Share to TwitterShare to FacebookShare to Pinterest
Get the Collected Editions scoop before anyone else -- on Facebook!

Scan this barcode with your phone or mobile device to take this post with you wherever you go.